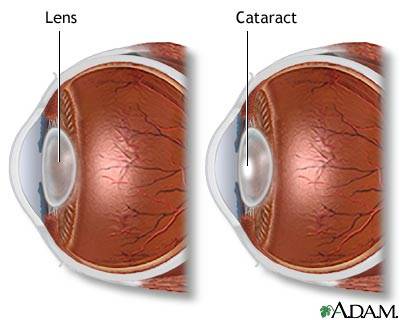 While a comprehensive eye examination can determine for certain if you have a cataract forming, there are a number of signs and symptoms that may indicate a cataract. Among them are:

What is a cataract?
A cataract is a clouding of the normally clear crystalline lens of the eye. This prevents the lens from properly focusing light on the retina at the back of the eye, resulting in a loss of vision. A cataract is not a film that grows over the surface of the eye, as is often commonly thought.

Why are they called cataracts?
Sometimes cataracts can be seen as a milkiness on the normally black pupil. In ancient times, it was believed this cloudiness was caused by a waterfall – or cataract – behind the eye.

Who gets cataracts?
Cataracts are most often found in persons over the age of 55, but they are also occasionally found in younger people, including newborns.

What causes cataracts?
It is known that a chemical change within the eye causes the lens to become cloudy. The change may be due to advancing age or it may be the result of heredity, an injury or a disease.

Excessive exposure to ultraviolet or infrared radiation present in sunlight or from furnaces, cigarette smoking and/or the use of certain medications are also cataract risk factors. Cataracts usually develop in both eyes, often at different rates.

Can cataracts be prevented and treated?
Currently, there is no proven method to prevent cataracts from forming.

If your cataract develops to a point that daily activities are affected, you will be referred to an eye surgeon who may recommend the surgical removal of the cataract.

Prescription changes in your eyewear will help you see more clearly until surgery is necessary, but surgery is the only proven means of effectively treating cataracts. The surgery is relatively uncomplicated and has a very high success rate.

When will I need to have cataracts removed?
Cataracts may develop slowly over many years or they may form rapidly in a matter of months. Some cataracts never progress to the point that they need to be removed. Usually, you will be ready to have the cataract removed when it is having a significant adverse effect on your lifestyle.

Our office will arrange a consultation with a surgeon who will decide on the appropriate time for removal. Most people wait until the cataracts interfere with daily activities before having them removed.

What happens after cataract surgery?
You, along with your doctors, will decide on the type of post-cataract vision correction that you will use. Intraocular lens implants, inserted in your eye at the time of surgery, serve as a “new lens” and are the most frequent form of visual correction. In some cases, however, eyeglasses or contact lenses may also be needed to provide the most effective post-cataract vision.

Cataract surgery has now developed to the point where most procedures are completed in a day and overnight stays in hospital are unnecessary. The results are usually excellent and patients are often able to appreciate a significant improvement in vision almost immediately following surgery.

Notes: Our staff will be pleased to answer any questions regarding exams, procedures, and frames.  Please contact us with any questions you might have.