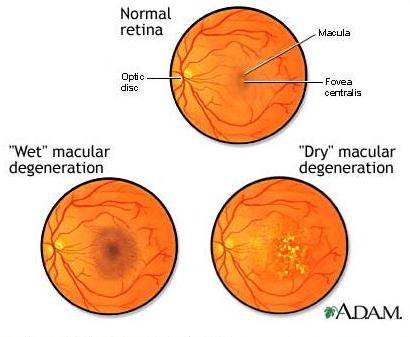 Age-related Macular Degeneration (AMD) is the most common cause of irreversible vision loss for people over the age of 60. It is estimated that 2.5 million people in developed countries will suffer visual loss from this disorder and that there are approximately 200,000 new cases diagnosed every year.

Macular degeneration is most common in people over the age of 65 but there have been some cases affecting people as young as their 40s and 50s. Symptoms include blurry or fuzzy vision, straight lines like telephone poles and sides of buildings appear wavy and a dark or empty area may appear in the center of vision.

What is the Macula?

The macula is the small portion of the retina located at the center of this light sensitive lining at the back of the eye. Light rays from objects that we are looking at come to a focus on the retina and are converted into electrical impulses that are then sent to the brain. The macula is responsible for sharp straight-ahead vision necessary for functions such as reading, driving a car and recognizing faces.

The effect of this disease can range from mild vision loss to central blindness. That is, blindness “straight ahead” but with normal peripheral vision from the non-macular part of the retina which is undamaged by the disease.

Ninety percent of ARMD is of the “atrophic” or “dry” variety. It is characterized by a thinning of the macular tissue and the development of small deposits on the retina called drusen. Dry ARMD develops slowly and usually causes mild visual loss. The main symptom is often a dimming of vision when reading.

The second form of ARMD is called “exudative” or “wet” because of the abnormal growth of new blood vessels under the macula where they leak and eventually create a large blind spot in the central vision. This form of the disease is of much greater threat to vision than the more common dry type.

What are the causes of ARMD?

Unfortunately, the cause of this eye condition is not fully understood but it is associated with the aging process. As we age, we become more susceptible to numerous degenerative processes like arthritis, heart conditions, cancer, cataracts and macular degeneration. These conditions may be caused by the body’s overproduction of free radicals.

Non-modifiable risk factors are ones you cannot change, such as:

Modifiable risk factors are those which you can change. The most important of these are:

It has also been hypothesized that hyperopia or farsightedness may also play a role in the development of the disease. It is thought that the shortening of the eye in hyperopia may cause changes in the membrane below the macula and in its blood vessels.

Normal metabolic processes in the eye produce Reactive Oxygen Species (ROS), molecules with unbalanced electrons. ROS cause cellular damage, alter DNA, and are thought to be at least partially responsible for many of the degenerative diseases mentioned above. This process is called oxidative stress, which results when the production of ROS is higher than the eye’s normal defenses can handle.

How is it treated?

Although researchers are spending a great deal of time investigating the cause and treatment of AMD, there is no real cure available. Addressing the modifiable risk factors is the best and only way to reduce the risk of developing AMD, and of reducing the risk of progression for those who already have the disease.

The main method of treating wet AMD is with injections of anti-VEGF (anti-Vascular Endothelial Growth Factor) directly into the eye. This treatment can slow and in some cases reverse the growth of damaging new vessels which leak into the retina, but in many cases, irreversible damage is done to the macula and central vision is lost.

Are Vitamins and Nutrition Useful?

No treatment exists for the dry form, but there is significant evidence which shows that specific vitamins and minerals can slow the progression of the disease. The AREDS and AREDS 2 studies showed a significant reduction of risk of progression of AMD using certain anti-oxidants, and research performed since then has identified which anti-oxidants are most important for the protection of the eye. Within the retina, a layer called the Macular Pigment protects the eye from high energy visible light, and (along with other vitamins and minerals) acts as a powerful anti-oxidant to reduce oxidative stress in the retina.